As primaries conclude around the country and we begin the long road to election day, Democrats from coast to coast are preparing to fight to either gain a seat at the table or keep their place for another term. From your local city council to the House and the Senate, these races will shape the course of the United States for years to come.

In light of the year Americans have experienced, it is more critical than ever to elect diverse leaders- especially Black leaders. So, we at DSPolitical have compiled this list of 10 Black candidates to watch in 2020. Whether this is their very first race or they are defending their seat, all 10 of these candidates will be ones to support come November. Lauren Underwood is currently representing Illinois’ 14th Congressional District as a member of the U.S. House. She first assumed office on January 3rd, 2019 after defeating Republican incumbent Randy Hultgren by a 5 percent margin. Underwood’s professional background is in nursing, she graduated from University of Michigan for her undergrad and went on to earn a Master of Science in Nursing degree from John Hopkins University. Prior to serving in Congress, Underwood worked as a policy coordinator and a senior advisor at the U.S. Department of Health and Human Services. She will be on the ballot in the general election this November running against Republican Jim Oberweis. Cynthia Wallace is running her first race to represent North Carolina’s 9th Congressional District in the U.S. House of Representatives. Wallace earned her B.S. in mathematics at Spelman College and her M.A. in statistics from the University of North Florida. Prior to running for election, Wallace’s professional experience was in the financial services industry, focusing on risk management and compliance with federal financial regulations, with three Fortune 500 companies. She’ll be running in the general election against incumbent Republican Dan Bishop. Christian D. Menefee is running his first race for Harris County Attorney in Harris County, Texas. In 2010 Menefee earned a bachelor’s degree from the University of Texas at San Antonio and afterward a law degree from Washington University Law School in 2013. Prior to running Menefee worked as a civil litigation attorney and was recognized in 2019 as a Texas Rising Star by Super Lawyers. He’ll be running in the general election against Republican John Nation. Lucy McBath is currently representing Georgia’s 6th Congressional District in the U.S. House of Representatives. She first assumed office on January 3rd, 2019, after defeating Republican incumbent Karen Handel by an incredibly close 1 percent margin. McBath graduated from Virginia State University with a bachelor’s degree in Political Science, and worked as a flight attendant prior to her election to the U.S. House. McBath also worked as a national spokeswoman for Everytown for Gun Safety after her son, Jordan Davis, was murdered in Jacksonville, Florida after the shooter objected to the music he was playing in his car. She’ll be running in the general election once again against Republican Karen Handel. Running for office for the very first time, Desiree Tims is on the ballot in the general election to represent Ohio’s 10th Congressional District in the U.S. House.
Tims earned a B.A. in communications from Xavier University, a J.D. from Georgetown Law, and also attended the Women’s Campaign School at Yale University. Tims illustrious resume includes working as a lobbyist and judiciary director at the League of Conservation Voters, a senior advisor to Child Care Aware of America, an aide to Sen. Kirsten Gillibrand, an aide to Sen. Sherrod Brown, and as an associate and White House intern for President Barack Obama. Come November, Tims will be going up against Republican incumbent Michael Turner. Ritchie Torres is currently a member of the New York City Council, representing District 15. Now however, Torres is running for office in the U.S. House of Representatives to represent New York’s 15th Congressional District. Prior to running for office in the U.S. House, Torres earned his degree at New York University and at 25 became the youngest elected official in New York City, serving on the New York City Council. Torres is also the first openly LGBT elected official from the Bronx. He’ll be running in the general election against Republican Orlando Molina Antonio Delgado is currently representing New York’s 19th Congressional District as a member of the U.S. House. He first assumed office on January 3rd, 2019, after defeating incumbent Republican Representative John Faso. Delgado graduated from Colgate University with high honors and earned a Rhodes Scholarship to Oxford. Afterward Delgado attended and graduated from Harvard Law School, and prior to his election to the House worked as an attorney. He’ll be running in the general election against Republican Kyle Van De Water. Mauree Turner is running her first race for election to represent District 88 in the Oklahoma House of Representatives. Prior to running for office, Turner worked as the Regional Field Director for the Campaign for Smart Justice, an ACLU campaign focusing on criminal justice reform. Born and raised in Oklahoma with a Muslim and baptist upbringing, Turner has a strong background in community organizing and a lifelong dedication to advocacy. She’ll be running in the general election against Republican Kelly Barlean. Rhetta Andrews Bowers is currently representing District 113 in the Texas House of Representatives. She first assumed office on January 8th, 2019, after defeating Republican Jonathan Boos in a tight race. Bowers attended Spelman College and Texas Southern University, earning a bachelor’s degree in Telecommunications with an emphasis in Broadcast Journalism. Prior to her career in public service she worked in public television in Washington D.C. and commercial television in her home state of Texas. She’ll be running in the general election against Republican Will Douglas. 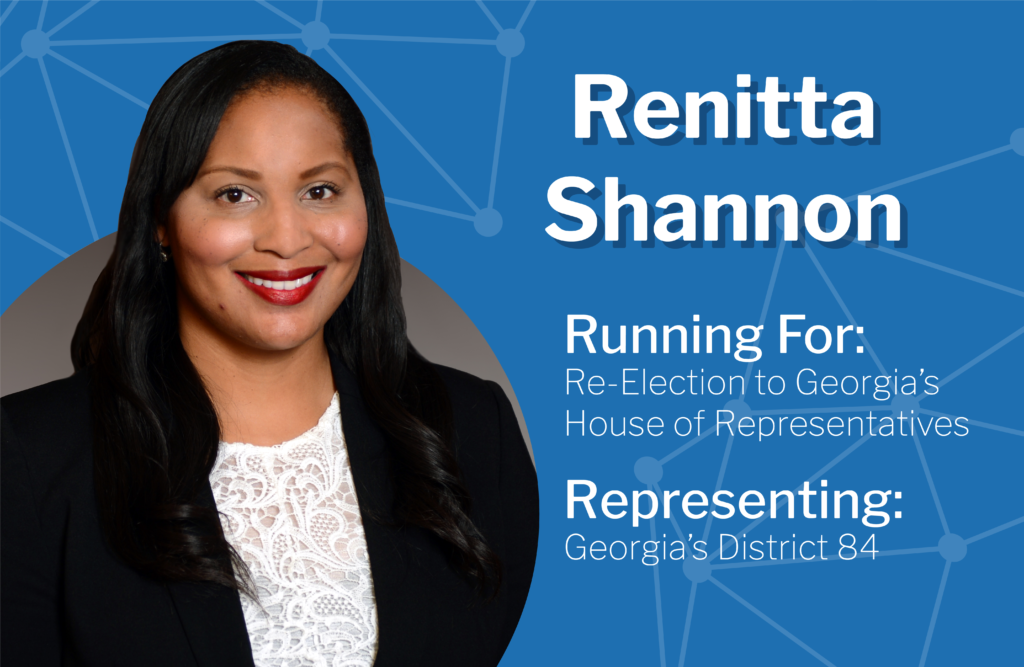 Renitta Shannon is currently representing District 84 in the Georgia House of Representatives. Shannon graduated from the University of Florida and subsequently worked in community organizing fighting for economic, racial, and gender justice. She is an avid supporter of abortion rights and outspoken about her own personal abortion story. Shannon is also the first bi-sexual legislator to serve in the Georgia General Assembly, and has been a consistent advocate for LGBTQ+ rights. She will be on the ballot in the general election on November 3, 2020

If you’d like to find more Black candidates you can support, check out this excellent resource– it was a huge help for us when compiling this list.